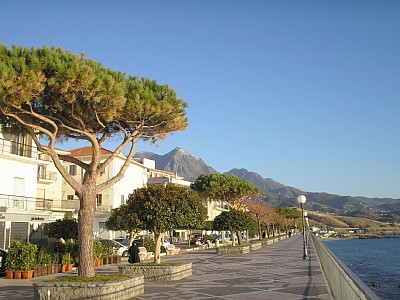 We are often asked to recommend a city in Calabria, near Scalea.

Without hesitation, we recommend you to visit the elegant city of diamante, which with its 8 km coastline and crystal clear sea, has rightfully earned the title of «Pearl of the Tyrrhenian sea». Although in preveda from the Italian «Diamante» means «diamond», which is reflected in the coat of arms of the city.

Only here, in addition to the typical white and black pebbles for this area, You can enjoy unforgettable sandy beaches of Golden color, which is very rare for this coast.

Opposite diamante is the unique uninhabited island of Cirella, covered with wild vegetation and striking for its unusual combination of bright colors: from greenery, steep rocky shores and the sea.

In diamante, you will also be pleased with the presence of a large number of good restaurants, both on the coast, specializing in seafood, and on the mountain, in the green zone, where meat dishes prevail. Importantly, many restaurants are open all year round and attract discerning Italians with their cuisine from all surrounding cities, up to the Residence itself.

Diamantes is also known in Italy as a cultural town with a huge number of unique wall paintings by famous artists. These works of art are accessible to any pedestrian. This kind of painting is called «murales», and thanks to them, diamante has become one of the most» painted » cities in the world: more than 150 wall paintings.

Another feature of diamante is the production of «citron», that is, a specific type of lemon that has a greenish hue, oval shape, smooth thick crust and weighs about 1 kg. It is, as you know, the traditional product of the entire «citron coast» (from Tortora to Citrara), whose capital is diamante. This species grows only in this area, and only here local artisans still produce in the traditional way the world-famous sweets and a specific liqueur «Liquore del Cedro» (something like Limochello, only from citron).

Every year since 1992, the city of diamante organizes such an important international event as the «Peperoncino Festival».

The festival takes place in early September, lasts a week, and is of a cultural and gastronomic nature. On it, everyone from all over the world has the opportunity to get acquainted with the typical products of this zone, taste the main dishes, and, of course, buy a bunch of red bitter peppers. It is then frozen and eaten all year round. We can safely say that almost the symbol of the city itself has become a red hot pepper.

Now you can understand why wealthy Italians seek to get a summer residence here, despite the fact that almost all villas are designed for year-round living, in contrast to the same Scalea, where it is not so common. The quality of the buildings themselves is also higher.

Accordingly, as for real estate prices, they are also slightly higher than in nearby towns, which fully pays for the unique location and availability of services, and, importantly, good neighbors. Here we are talking about the so-called 100% «quality Calabria», ideal for both seasonal recreation and year-round living.

Diamonds can also be considered from the point of view of a profitable investment. The city occupies a strategic position on the Tyrrhenian sea. Therefore, the project has already been approved and the construction of a new port «Marina di Diamante» has begun, taking into account all the innovative technologies and innovations. The project provides for the completion of the port by 2014 and will be a convenient point of connection between the North and the South in the near future. Therefore, if someone is seriously thinking about investing, we recommend looking at this small town with a population of 5 thousand, but with great potential for development.

Although we should not forget that Diamante is already a long-awaited stop for many yachts, and a couple of restaurants in the city of diamante provide catering services with delivery to the yacht, as well as the ability to accompany customers from Board to shore and back.

elegant Villa in modern style with a swimming pool and a neat garden. 3 floor single standing the Villa itself is 230 sq m +